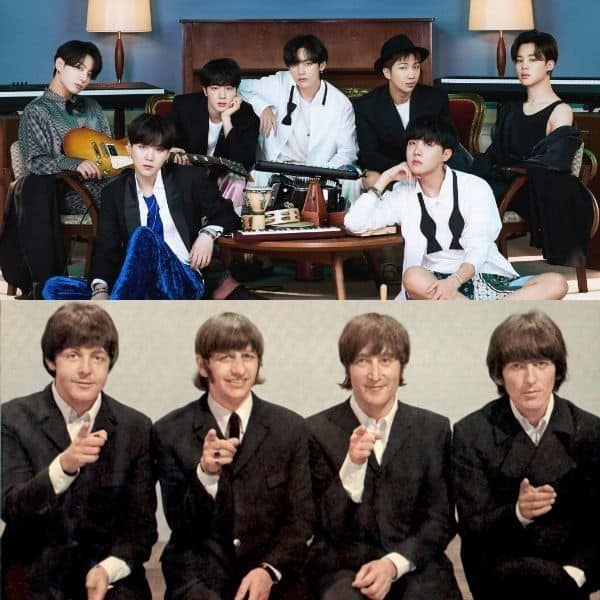 The BTS is gearing up for their upcoming album, BE (Deluxe Edition) which is just a couple more days away from release. BE will be out on November 20th at 2:00 PM KST which is 10:30 AM as per Indian Standard Time. BTS has been a revolution in themselves and has taken over the world with their music. They enjoy a mammoth fan base all across the globe and are growing in terms of popularity every passing day. Some have even compared them to The Beatles. Yes, if you are a K-pop and BTS fan, you would know that they are being called the next Beatles. The Beatles were an English rock band formed in Liverpool in 1960. It consisted of John Lennon, Paul McCartney, George Harrison and Ringo Starr who are still very popular and deemed as the most influential boy band. So, before the Wall Street Journal Magazine’s 10th Annual Innovator Awards in which BTS were the honorees, James Cordon hosted the septet on his show. They talked about their cultural influence, professionalism, nature, incredible talent and also their fun Carpool karaoke session. Also Read – BTS to bring in New Year 2021 with a concert — deets inside

During this, James asked them about the constant comparisons with The Beatles. RM, the frontrunner of the boy band, addressed the same saying, “We’ve never ever been like Beatles or even, like, more than them. We’re just like seven normal kids who love music and performance, who have a dream to give hope and love and positive energy and inspiration to the people in the world.” Whereas Jin said, ” Wow, the Beatles… To even be compared to the legendary group is a great honour.” Also Read – BTS’ Jungkook creates a record of longest charting K-pop solo in Billboard World Digital Song Sales chart

While the comparison with The Beatles is an honour in itself. But the comparison isn’t justified as it brings the pressure to prove themselves time and again. It also makes one lose their individual identity. BTS and The Beatles have no similarities as they had different struggles and different stories. Also Read – BTS: Top 10 songs of the most famous K-pop boy band that you must have on your playlist

Eden Hazard or Kevin De Bruyne? Romelu Lukaku or Vincent Kompany? Tottenham, Chelsea and Man United have had Belgium’s finest, but who is the Premier League’s best?

Mortgage free at 42: Homeowner shares her ‘secret’ to paying off her…

‘She just had a negative test’: COVID-19 hits family hard after expedited test…

KorieHope Dec 4, 2020 0
With major federal jobless aid programs slated to expire by year-end, the question is what could replace them as…

‘She just had a negative test’: COVID-19 hits family hard after…

EU on the ropes: Bloc’s chief lambasted over ‘visas for…