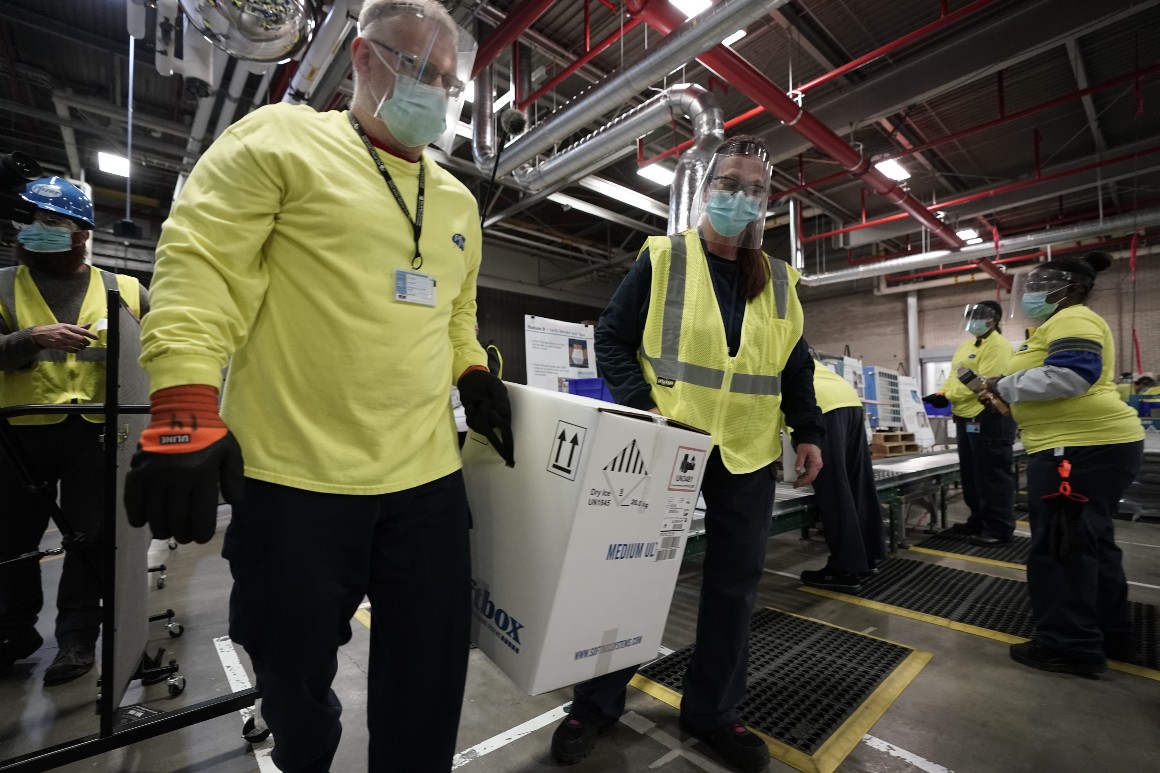 The logistics of transporting the vaccine, which must be kept at ultra-cold temperatures, are complex. Shipping companies are relying on tech tools like temperature monitoring and GPS trackers to ensure the doses arrive unspoiled. Trucks carrying the vaccine will also have security escorts, company executives told a Senate subcommittee on Thursday.

The vaccine cleared final administrative hurdles this weekend, after an advisory committee to the Centers for Disease Control and Prevention on Saturday recommended the shot be used in people 16 years and older. CDC Director Robert Redfield on Sunday afternoon announced that he had formally accepted the recommendation the previous night, allowing shots to be given as soon as Monday.

Roughly 2.9 million doses are going out in the first shipments. Federal officials from Operation Warp Speed, the government’s vaccine accelerator, said another 2.9 million will be reserved for people to receive their second dose of the shot, which is to be administered three weeks later. The government is also holding 500,000 doses of the vaccine — developed by Pfizer’s German partner, BioNTech — in emergency reserves.

Officials caution that the initial supply is extremely limited and will only go to people at highest risk. The CDC recommended health care workers and long-term care facility residents get the vaccine first, though states and territories will have final say over who they choose to prioritize.

HHS Secretary Alex Azar earlier this week said Covid-19 vaccines will be available to the broader public in the second quarter of 2021.

Moderna is expected to receive FDA authorization for its vaccine this month, but the timing for greenlighting other vaccine candidates is uncertain. There are lingering concerns that the U.S. could face shortages in the coming months amid global competition for limited doses of vaccine.

Results from the Pfizer/BioNtech trial showed the vaccine is 95 percent effective at preventing disease and had no serious side effects. Though the U.K. reported adverse effects in patients with a previous history of allergic reactions, U.S. health officials said those concerns were examined during the FDA review.

‘Nobody is telling you what to say’: Fauci regains the spotlight under Biden

Eurostar CRISIS: Expert urges UK to be tough with French on bailout –…

Koriehopeworldnews Jan 24, 2021 0
The following is a transcript of an interview with former White House coronavirus response coordinator Dr.…

Eurostar CRISIS: Expert urges UK to be tough with French on bailout…

Dr. Deborah Birx on her time in the White House and pandemic politics

Pope Francis prays for homeless dead, limits appearances due to…