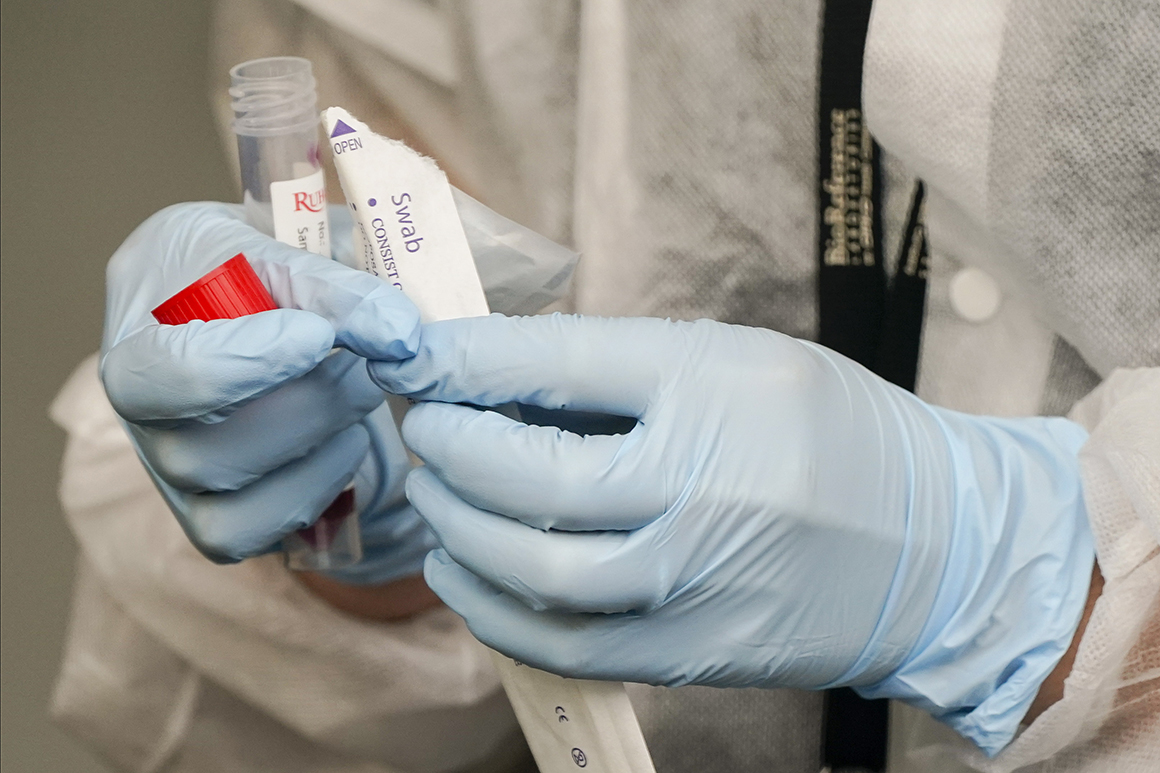 The noncompetitive, sole source contract HHS recently signed with NDA Partners — a Rochelle, Va., consulting firm that employs former top FDA regulators — is only worth a maximum of $1.5 million. Public health experts said the decision is largely symbolic, since the incoming Biden administration could return responsibility for reviews to FDA. But it comes after a bruising pandemic year for the agency and its scientists, who Trump without evidence repeatedly accused of slowing down progress of tests, drugs and vaccines for political reasons.

“It’s concerning because it gives at least the strong appearance that these decisions about scientific questions are being taken away from the FDA and lodged elsewhere,” said Rachel Sachs, an associate professor of law at Washington University in St. Louis. “The emerging picture for HHS Secretary Azar seems to be to bind the hands of FDA as much as he can going forward, before he leaves office.”

The current skirmish concerns tests that labs develop for their own use, which have been a particular point of contention between HHS and FDA during the pandemic. Senior FDA officials strongly objected to HHS’ August decision, announced in a one-paragraph memo, to strip the agency of its ability to require premarket review of the products. They argued that the decision could allow flawed tests to be used during a public health emergency.

The health department maintained at the time that firms could still choose to apply to FDA for an emergency use authorization, which carries with it some liability protections for the labs. But FDA decided to stop reviewing any lab-developed tests, which are each developed and used by only one lab, to focus on diagnostics that could add sizable U.S. testing capacity or represented technological advantages, such as the ability to screen for the virus at home.

In response, HHS testing czar Brett Giroir told reporters in November the health department would enlist CDC or the National Cancer Institute to assist with reviews if FDA could not assess the tests in a timely manner. It’s not clear whether either of those agencies has a role now in reviewing lab-developed tests or if HHS will only rely on NDA Partners, which employs former longtime FDA diagnostics director Alberto Gutierrez and medical device director David Feigal.

An HHS spokesperson told POLITICO the latest move comes in response to labs telling the health department they will not offer Covid-19 testing without the liability protections conferred by an EUA. There are at least 19 emergency-authorization applications pending for lab-developed tests.

Giroir “will exercise his authority from Secretary Azar to act as the Secretary’s delegate to issue EUAs for LDTs, with a focus on universities,” the spokesperson said.

Gutierrez said HHS asked NDA Partners to help review lab-developed tests. FDA referred to HHS questions about whether it signed off on the third-party test reviews.

“I don’t think they have a choice,” Gutierrez said.

FDA’s diagnostic regulators have been slammed with a deluge of requests for emergency authorization of Covid-19 products, leading the agency to put on hold review of many non-Covid submissions. Tim Stenzel, the FDA’s chief diagnostics regulator, said Wednesday on an industry call that the agency is still receiving about 40 applications per week.

“We have put over 100 regular non-Covid submissions on hold right now, that is weighing on us, we want to get back to them as soon as possible,” Stenzel said.

The American Clinical Laboratory Association, which represents major private labs like LabCorp and Quest Diagnostics, declined to comment on HHS’ decision to enlist a private firm for test review. The lab lobby has long maintained that FDA does not have the legal authority to regulate LDTs as medical devices.

Sen. Michael Bennet (D-Colo.) — one of the sponsors of legislation that aims to overhaul how FDA regulates diagnostic tests — slammed the HHS decision, saying it would endanger public health.

“Senator Bennet is concerned that HHS overstepping FDA and allowing a third party to review applications for Emergency Use Authorizations for COVID-19 tests sets a precedent that gives private companies the power to authorize diagnostics, hurting the ability of the FDA to ensure that tests are accurate and safe and putting Americans’ medical decisions and lives in danger,” said a spokesperson for the senator.

The latest news in health care politics and policy.

“I think the new administration wants testing expanded,” he said. “You could come up with a way to still use this resource that has already been contracted for and do it in a way that’s more consistent with respecting FDA’s authority and expertise and oversight.”

Alec Baldwin, wife Hilaria slammed over sixth baby post; actor gets back at…

Koriehopeworldnews Mar 2, 2021 0
New data is confirming a baby boom that some doctors expected was actually a "baby bust." Health departments in…

Brexit latest: Italy urged to follow Britain out of EU as exports to…