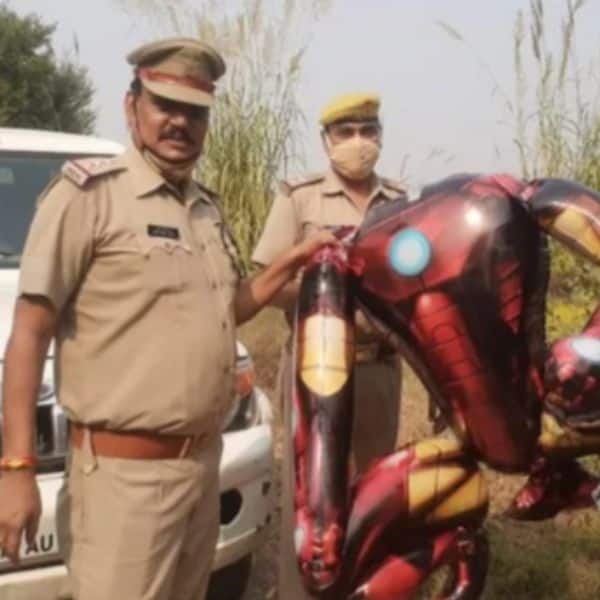 While kids world over love Iron Man, the sight of a balloon in the shape of the legendary fictional character triggered off a sense of panic in a village in Uttar Pradesh. On Saturday morning, residents of Dankaur town in Greater Noida spotted a huge gas balloon flying in the sky. It looked like a robot. The unusual sight of the balloon made people wonder what’s happening. Well, it was a balloon filled with helium gas in the shape of Iron Man. But many residents thought it was an alien. Later, the balloon landed in a canal near the Bhatta Parsaul village. It seems a crowd gathered to see what was the strange object that was floating above Dankaur. Also Read – RIP Chadwick Boseman: Marvel gives an emotional tribute to the Black Panther actor, ‘You will always be our King’ – watch video

Police officer, Anil Kumar Pandey told PTI, “It was a balloon filled with air that had gone up in the sky and later came down and got stuck in the bushes along the canal. A part of the balloon was touching the flowing water in the canal which had led the balloon to shake a little. Unbeknown to the spectators, this made for an anxious watch.” They said it was a harmless thing, but people wondered who let it out in the air. Also Read – Chadwick Boseman’s final tweet becomes the most liked post on Twitter ever — read details

Talking about Iron Man, Robert Downey Jr spoke to David Letterman about how it felt like getting into the Iron Man suit for the first time recently. He said, “They wanted to spend as little as they could on CG replacement, so I remember this helmet went on, and there’d be a shot, and I’d be in this whole suit, and they’d say: ‘All right, Robert, it’s like you landed on the roof, so when we say action, just go like that, like you just landed, and then start moving forward.’ So I put this helmet on, and it slammed closed, and I couldn’t see anything, and then these LED lights went on and it was like The Manchurian Candidate… I was absolutely blinded.” Also Read – When Robert Downey Jr. called Aamir Khan the ‘Tom Hanks of India’

‘My biggest dream is growing old with you,’ Justin Bieber pens mushy post…

Tenet To Saina, List Of Upcoming Theatrical Releases For All You Cinema Lovers

KorieHope Nov 24, 2020 0
A Black transgender woman is suing the Georgia Department of Corrections, accusing officials of failing to…

GSA will brief House and Senate committee leaders as it stalls…