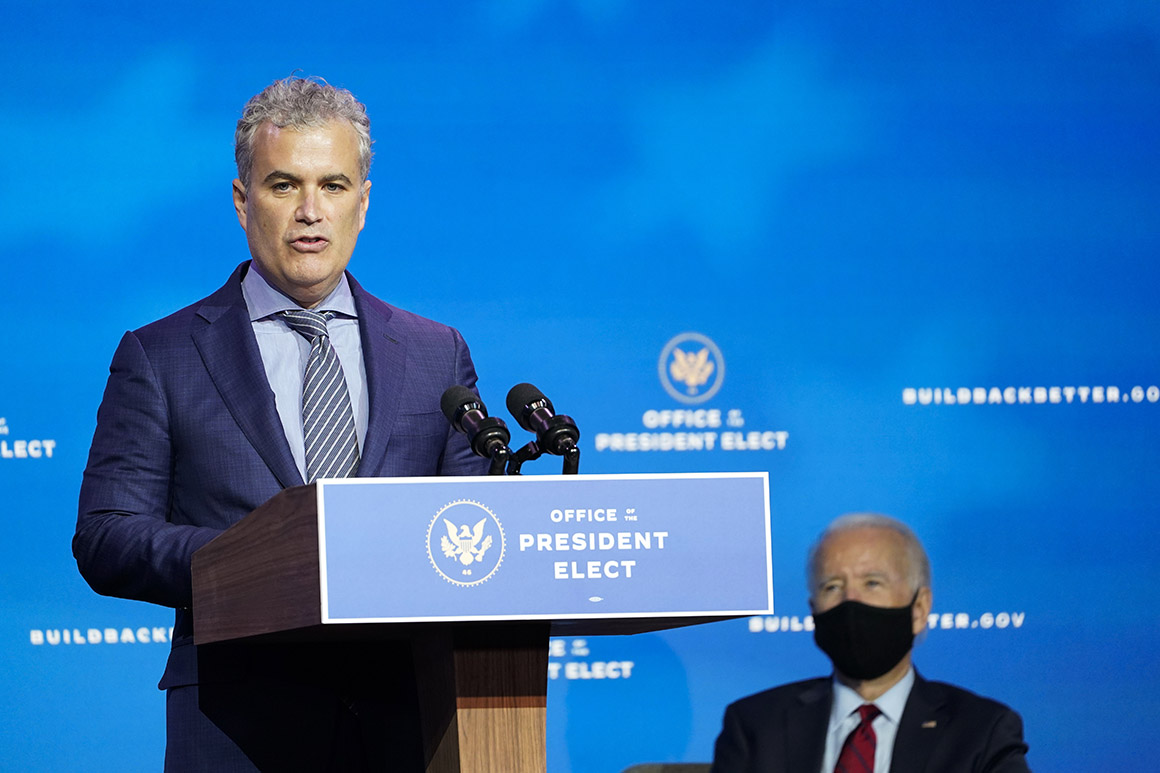 In interviews, multiple senior transition officials defended Zients and stressed the enormity of the challenge, noting that the Trump administration has refused to share key information for weeks.

Still, the U.S. has conducted around 7 million vaccinations over its first three weeks, well below the million-a-day rate Biden will need to hit. While some Biden advisers insist it’s possible to make good on the 100-million vow, others are privately worried that the federal response is already so chaotic that it will take a herculean effort to pull it off.

Transition officials described encountering a litany of challenges and a lack of long-term planning by the Trump administration, putting them in a hole so deep it could take weeks to get the vaccination campaign on track. They conceded that the team is still working to solve some of the most pressing issues.

“We’re uncovering new information each day, and we’re unearthing — of course — more work to be done,” Vivek Murthy, Biden’s nominee for surgeon general, said in an interview. “We’re in an ongoing process of building the 100 million shots campaign, and we will make that goal work.”

Biden’s aggravation is rooted in the rush to build the foundation for an extended inoculation effort, a complex undertaking that includes untangling all manner of bureaucratic obstacles — from staffing issues to technology problems and insurance coverage dilemmas — that the transition had expected to already be well underway, 11 people close to the transition told POLITICO.

In a statement, Biden transition spokesman T.J. Ducklo defended the team’s work, saying “Jeff Zients is the right person for the job and wakes up every day focused on how to vaccinate every single American as quickly as possible, and the President-elect has full confidence in the plan he and his team are putting forward to get that done.”

The vaccination effort has been further hampered by divisions within Biden’s own team, most recently over the decision to keep Gen. Gustave Perna in his role as chief operating officer of Operation Warp Speed, the government’s vaccine accelerator.

Perna has faced sharp criticism over the turbulent first weeks of the vaccine rollout, which missed his initial prediction of 20 million shots by the end of December and instead vaccinated closer to 2.6 million Americans. Perna later shifted his projection, saying Warp Speed would deliver 20 million doses to states by the first week of January.

Biden allies now worry that retaining Perna will damage the new administration’s effort to signal a fresh start and build public confidence in its own Covid-19 response.

“Everybody coming into this has an expectation that there’s a clean break,” a person who has been working with the transition said. “This last sordid episode is gone and we’re bringing new, fresh people in — certainly at the top. Of course you’re going to have holdovers — you have to for institutional memory — but as the face of the operation, it seems almost insane to have someone like Perna.”

Others have come to Perna’s defense, arguing that he shouldn’t be held responsible for the broad scope of the Trump administration’s failures — and that his months of experience running Warp Speed will prove valuable within Biden’s revamped response.

Beyond Perna, though, there have been growing pains internally as Biden’s Covid team tries to get in sync to meet the lofty goal, according to people familiar with the effort.

Biden selected Zients to run the coronavirus response given his reputation as “Mr. Fix-it” in the Obama administration, where he served as director of the National Economic Council and led the effort to restore the Obamacare enrollment website HealthCare.gov after its botched rollout.

But Zients, a business executive, and Quillian, who was until recently a partner at Boston Consulting Group, do not have public health backgrounds, and there’s been tension over their approach, which some people said was too broad-brush and not detailed enough for the complexity of the problem. Quillian had previously clashed with staffers on the campaign who felt the consultant-style mindset she tried to apply didn’t fit with a campaign operation, according to multiple staffers.

Biden has emphasized the need for a dramatically different approach to the health crisis than Trump, and has pressed the team for more specifics on how they plan to execute on the vaccine distribution process. Biden is known to push his staff to brief him in layman’s terms, urging advisers to avoid generalities and drill down on the particulars, the people said.

Biden on one occasion became exasperated with Zients and the team for not arming him with enough details on their planning ahead of a mid-December meeting between Biden and governors focused largely on the coronavirus response.

“They probably require some more practical doers with deep experience in navigating business and government,” the person who has been working with the transition said. “People who have actually made a bill become law or pulled together industries and understand what businesses are capable of and what they’re not.”

Some Biden officials downplayed the incident as a sign of Biden’s intense focus on the Covid-19 planning, and the high standards he’s set for a team tackling the defining challenge of his first 100 days.

“He doesn’t want to just hear pipe dream ideas or just the headlines of the plan,” Murthy said. “He wants to know about the practical details. I think that’s a good thing because that makes sure the plans are grounded in reality, but I don’t take from those conversations that he doesn’t believe in his team.”

Sarah Bianchi, a longtime Biden aide who has worked on the transition, defended Zients’ work, calling his role coordinating the various policy experts across government “the right model.”

“Jeff Zients with the right policy team — there’s no one better,” she said.

Still, just 6.7 million Americans had received a coronavirus vaccine through Jan. 8, according to the Centers for Disease Control. Health officials across the country working to solve the slowdown are warning there is no easy fix, especially as they grapple with a brutal surge of Covid-19 deaths and hospitalizations.

And while the Trump administration insists that the vaccination rate will soon pick up, Democrats inside and outside the transition are increasingly questioning whether Biden’s first big pandemic pledge placed too much confidence in an outgoing administration that has repeatedly overpromised and under-delivered.

“I’m very nervous about setting a target and not being able to meet it,” Kavita Patel, a Brookings Institution fellow and former Obama administration official, said of the 100-million vaccinations vow. “I would feel much more comfortable if we could actually set something that we could succeed on early to give people faith.”

A person familiar with the Biden transition’s work said the team also had to spend initial weeks negotiating with the Trump administration for access to information, including to Tiberius, the central government database used to monitor vaccine distributions. Biden’s Covid team continues to be denied access to certain standing meetings related to the government’s response across the health and defense departments, the person said.

In a statement, a spokesperson for the Department of Health and Human Services said the department is “committed to smooth, professional transition planning” and has held hundreds of briefings across the department with Biden’s team during the transition, with plans to continue that work through Jan. 20.

Biden has criticized the Trump administration over its early vaccine push for “falling behind, far behind.” Yet he’s refused to back off his own goal, instead doubling down on the belief that his administration can get at least 100 million shots into arms by April 30.

“Will this be challenging? Absolutely,” Anthony Fauci, the country’s top infectious disease expert and Biden’s incoming chief medical adviser on coronavirus, told POLITICO. “This is an unprecedented effort to vaccinate the entire country over a period of time that’s fighting against people dying at record numbers. To say it’s not a challenge would be unrealistic. Do I think it can be done? Yes.”

The incoming Biden team is preparing a range of new initiatives aimed at speeding the distribution, including dispatching mobile vaccination units to rural areas and erecting new federal sites to administer the shots.

On Friday, the Biden transition said it plans to push out all available vaccine doses upon taking office — a break from the current approach of reserving half the nation’s supply to ensure people who receive their initial shot can complete the two-dose sequence.

Biden officials are also focused on establishing clearer guidance for state health officials responsible for actually administering the shots, and laying the groundwork for staffing and funding reinforcements across the nation.

Inside the Biden camp, officials pinned the success of their plan — and the 100-million pledge — largely on the ability to persuade Congress to quickly pass another relief package that includes billions of dollars for state and local governments. Biden has acknowledged this limiting factor.

“I’ve laid out three challenges in our first 100 days. One of them is ensuring that 100 million shots have been administered by the end of the first 100 days,” Biden said late last month. “If Congress provides the funding, we’d be able to meet this incredible goal.”

Some transition advisers contended that even if Biden falls short of the 100-million mark, the pledge will have been critical to setting expectations across federal and state governments — and signaling those ambitions to the public. The administration is also planning to offer clear and regular updates on its progress, a practice absent throughout much of the Trump response and that officials believe will build goodwill.

Yet Biden allies have voiced skepticism in recent weeks, warning the transition about the overriding political consequences of breaking one of Biden’s first major promises — a setback they worried would invite sharp criticism and only end up hurting his credibility.

“There is a palpable concern,” said another person close to the transition. “The American people have some degree of patience, but things need to be dramatically improving in the first 100 days.”

The latest news in health care politics and policy.