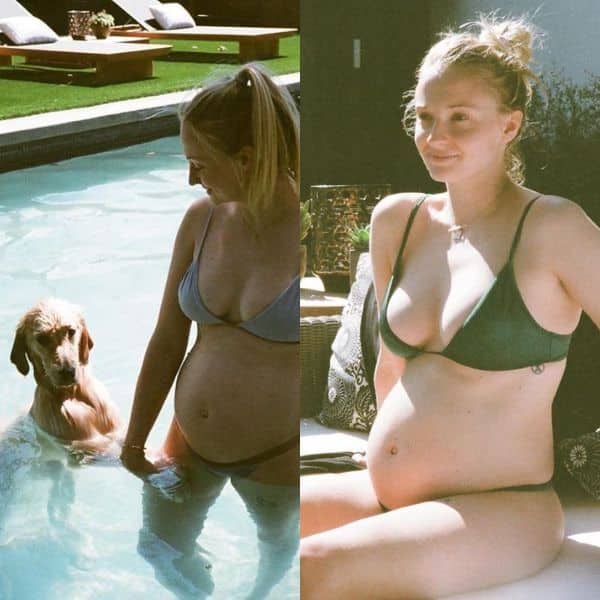 Sophie Turner delivered a baby girl, Willa on July 22, 2020. The parents Joe Jonas and Sophie Turner have been keeping a low profile since then. However, Sophie Turner has now taken to Instagram to share pictures of her baby bump. In couple of pictures, she is seen in a bikini. In one of them she is lazing by the pool side. In the other pic, she is playing in the pool with her pet dog. It is the new pet that she got home after the tragic death of their dog, Waldo in a freak accident. In one of the pictures, we can see her cradling her baby bump. Khloe Kardashian, Hailee Steinfeld and Ashley Graham sent love to Sophie, who is glowing in the pictures. Also Read – Sophie Turner revisits her pregnancy days, shares UNSEEN baby bump pictures as she chills by the pool

This is the new dog they got after the demise of Waldo. The couple got tattoos done of their pet in his loving memory. He died in a freak accident. The couple are huge dog lovers. They have an Alaskan Klee Kai and a Golden Retriever. They bond a lot over their love for canines. Also Read – Happy Birthday, Joe Jonas: Nick Jonas and Priyanka Chopra have the most hilarious wish for the singer

The baby girl has been named as Willa. It is the feminine form of the popular American name, Will. In August, they shared first photos of the little one. Joe Jonas and Sophie Turner were sure that they wanted a family soon after their marriage. Also Read – Sophie Turner and Joe Jonas become proud parents; welcome a baby girl

Sophie Turner is known as Sansa Stark from Game Of Thrones. The show is a worldwide hit. For the rest, she is famous as Priyanka Chopra’s sister-in-law. The lady is looking so radiant in these beautiful unseen pics.

Oscar winner Jeff Bridges diagnosed with cancer; says, ‘Although it is a…

Martin Lewis: Are you working from home? You can claim tax relief for the whole…

KorieHope Oct 21, 2020 0
A patrol car of the Lagos State Security drives through Nigerian protesters demonstrating in…

"The FBI Declassified": 20 Days of Terror: The Austin Bomber