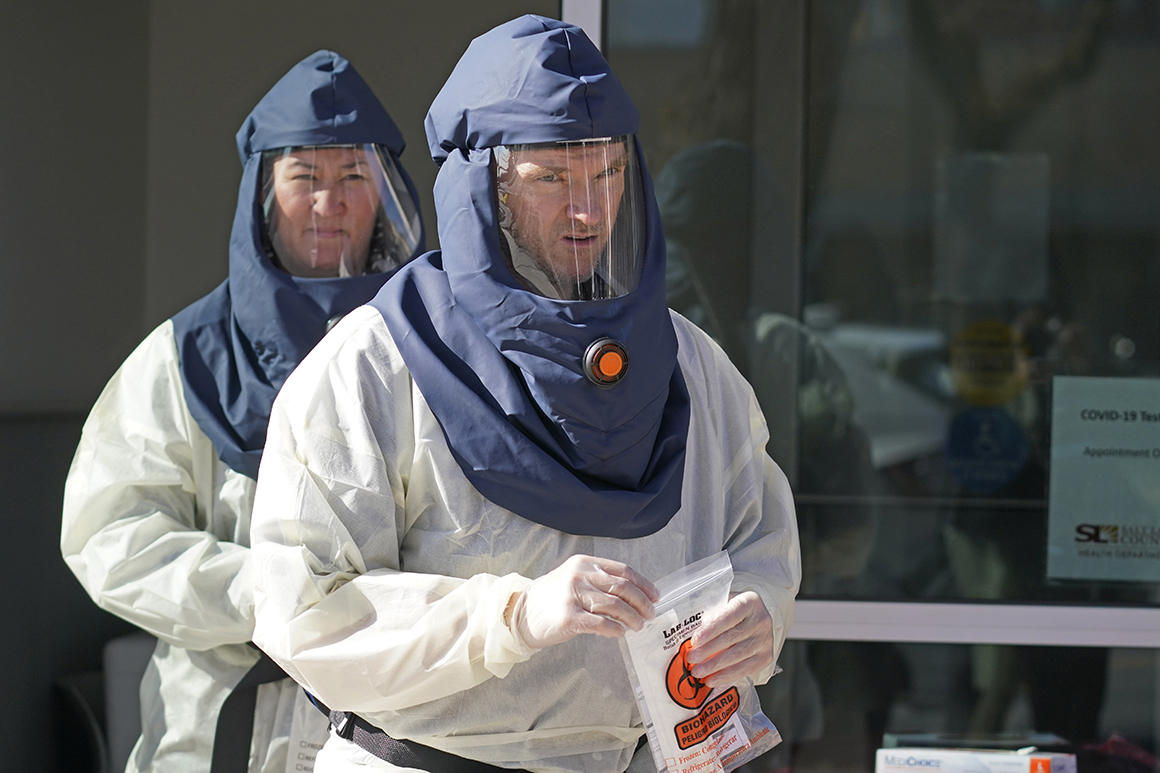 “If you want to have a better 2021, then maybe the rest of 2020 needs to be an investment in driving the virus down,” said Cyrus Shahpar, a former emergency response leader at the CDC who now leads the outbreak tracker Covid Exit Strategy. “Otherwise we’re looking at thousands and thousands of deaths this winter.”

The country’s health care system is already buckling under the load of the resurgent outbreak that’s approaching 10 million cases nationwide. The number of Americans hospitalized with Covid-19 has spiked to 56,000, up from 33,000 one month ago. In many areas of the country, shortages of ICU beds and staff are leaving patients piled up in emergency rooms. And nearly 1,100 people died on Saturday alone, according to the Covid Tracking Project.

“That’s three jetliners full of people crashing and dying,” said David Eisenman, director of the UCLA Center for Public Health and Disasters. “And we will do that every day and then it will get more and more.”

The University of Washington’s Institute for Health Metrics and Evaluation predicts 370,000 Americans will be dead by Inauguration Day, exactly one year after the first U.S. case of Covid-19 was reported. Nearly 238,000 have already died.

Shahpar said that even before Biden takes control of government in January, he and his team can make a difference by breaking with Trump’s declarations that the virus is “going away,” communicating the severity of the virus’ spread and encouraging people to take precautions as winter approaches.

“There’s been a misalignment between the reality on the ground and what our leaders are telling us,” he said. “Hopefully now those things will come closer together.”

But Shahpar and other experts warn that even if Biden and his task force start promoting public health measures now, it will take weeks to see a reduction in hospitalizations and deaths — even if states clamp down. And there is little indication that the country will drastically change its behavior in the near term.

Some governors in the Northeast, which was hit hard early in the pandemic, are imposing new restrictions. In the last week, Connecticut, Massachusetts and Rhode Island activated nightly stay-at-home orders and ordered businesses to close by 10 p.m. And Maine Democratic Gov. Janet Mills on Thursday ordered everyone to wear a mask in public, even if they can maintain social distance.

But in the Dakotas and other states where the virus is raging, governors are resisting calls from health experts to mandate masks and restrict gatherings. On Sunday morning, South Dakota Republican Gov. Kristi Noem incorrectly attributed her state’s huge surge in cases to an increase in testing and praised Trump’s approach of giving her the “flexibility to do the right thing.” The state has no mask mandate.

And unlike earlier waves in the spring and summer that were confined to a handful of states or regions, the case numbers are now surging everywhere.

In New Mexico, the number of people in the hospital has nearly doubled in just the last two weeks and state officials said Thursday that they expect to run out of general hospital beds in a matter of days.

“November is going to be really rough on all of us,” said Democratic Gov. Michelle Lujan Grisham — a contender to lead the Department of Health and Human Services in Biden’s administration. “There’s nothing we can do, nothing, that will change the trajectory. … It is too late to dramatically reduce the number of deaths. November is done.”

Minnesota officials said last week that ICU beds in the Twin Cities metro area were 98 percent full, and in El Paso, Texas, the county morgue bought another refrigerated trailer to deal with the swelling body count.

“We had patients stacking up in our ER,” Jeffrey Sather, the chief of staff at Trinity Health in North Dakota said during a news conference last week. “The normal process is we call around to the larger hospitals and ask them to accept our patients. We found no other hospitals that could care for our patients.”

An “ensemble” forecast used by the Centers for Disease Control and Prevention — based on the output of several independent models — projects that the country could see as many as 11,000 deaths and 960,000 cases per week by the end of the month. Researchers at Los Alamos National Laboratory suggest that the U.S. will record another 6 million infections and 45,000 deaths over the next six weeks, while a team at Cal Tech predicts roughly 1,000 people will die of Covid-19 every day this month — with more than 260,000 dead by Thanksgiving. The University of Washington model forecasts 259,000 Americans dead by Thanksgiving and 313,000 dead by Christmas.

Eisenman predicted that by January, the United States could see infection rates as high as those seen during the darkest days of the pandemic in Europe — 200,000 new cases per day.

“Going into Thanksgiving people are going to start to see family and get together indoors,” he said. “Then the cases will spread from that and then five weeks later we have another set of holidays and people will gather then and by January, we will be exploding with cases.”

Ademola Lookman Panenka penalty fail should see him fined, says Andy Cole and Fulham man accused of making situation ‘all about him’

Knockouts ARE allowed, but exhibition fight will see shortened rounds and no…

What is a coronavirus testing desert?

KorieHope Nov 28, 2020 0
It's already the best Christmas ever for 7-year-old Vivian Lord of Little Rock, Arkansas. But why such glee over…