Hrithik Roshan praises Dimple Kapadia’s performance in Tenet; says, ‘The charm, the power, the poise, the seductive eyes, Dimple aunty you are something else!’


Christopher Nolan’s sci-fi venture Tenet, which was the first big release after pandemic, garnered appreciation and accolades for its story and performances across the globe. While we saw many celebs praising the film, the latest star to gaga over the film and Dimple Kapadia’s performance was none other than the Greek God of Bollywood, Hrithik Roshan, who shared a insta-story of Dimple Kapadia along with John David Washington and wrote, “Hers is unmistakably one of the best performances by an Indian actor in an international film. Just brilliant!!!! The charm, the power, the poise, the seductive eyes, Dimple aunty you are something else! Go see Tenet for HER.” Also Read – Tenet box office collection: Christopher Nolan’s sci-fi action-thriller remains steady 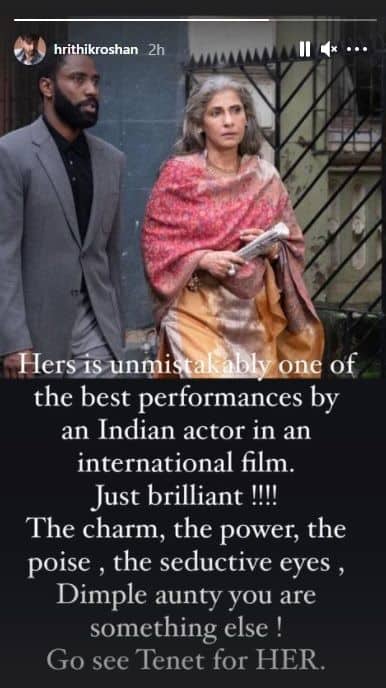 While the audience are raving about Dimple Kapadia’s performance, the actress recently revealed that earlier, when she got an audition, she thought it was a prank as why the filmmaker like Nolan, would want her in the film. The actress also called the filmmaker a man of few words and said that she loved Prestige and called it a masterpiece. Also Read – Proud son-in-law Akshay Kumar posts a handwritten note of Tenet director Christopher Nolan for Dimple Kapadia

Speaking about bagging the role in Tenet, Dimple told E Times, “I got a call for an audition, which I thought was a prank call. Why would Christopher Nolan want me for his film? I am nowhere on the radar. I told my nephew (Karan Kapadia), ‘Koi meri taang kheench raha hoga. Don’t get your hopes too high.’ I wondered what if I couldn’t remember my lines to save my life! I don’t do auditions anymore (smiles!). Then I thought… let me give it a shot to see whether I can do it. I did it and sent it across. Then I was told that Nolan is coming to India and I was requested to do an audition for him. I went with Karan to take a picture with Nolan, and thought… ‘Part toh milne wala hai nahin, photo hi sahi.’ When I got the part, I was nervous and was wondering how do I prepare for the role. I told my mother, ‘Mom, your daughter is working with one of the biggest directors in the world.’ I haven’t seen her smile like that in years.”

Sokratis to join Olympiakos in twist, Gunners crash out of FA Cup as Balogun…

Google threatens to shut down in Australia over proposed tech law

Koriehopeworldnews Jan 23, 2021 0
At least 5,000 National Guard troops will remain in Washington, D.C., through mid-March, according to a…

Trump faces a second impeachment trial. Here’s how it could be…