George Clooney opens up on his first meeting with Amal; says, ‘I’m 17 Years older, she might have thought I was grandpa’ 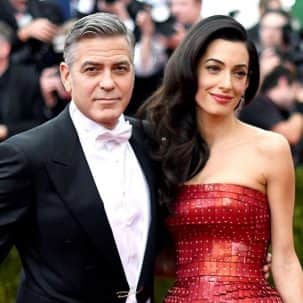 George Clooney and Amal are one of the most loved couples of Hollywood. Despite the 17-year age gap between the duo, their enigmatic charm makes them the most adorable duo in the west. The handsome hunk, who enjoys a tremendous fan-following across the globe, recently opened up on his firsts meeting with Amal at a charity fundraiser in September 2013 in the The Howard Stern Show and said that he was instantly attracted to her but didn’t know whether the feelings are mutual. Also Read – Trial by Media web series review: Netflix’s new docuseries puts us at the centre of America’s most volatile courtroom trials

The Midnight Sky star said, “I was in Lake Como, single, and a friend of mine said, ‘Is it okay if I bring my friend over, I’m on my way to the Cannes Film Festival, can I bring my friend over?’ And my mom and dad were staying with me in Como at the time, and a couple of other friends. And I was like, ‘Sure, bring her over.’” Also Read – Ad Astra star Brad Pitt chats up with NASA astronauts asks about Chandrayaan 2 moon lander and George Clooney

He added, “And in walks Amal, and she’s stunning and funny and the smartest person in every room she walks into. And I was really taken with her. We didn’t—we stayed up all night and talked, but we didn’t date. We just started writing each other, and I wrote her for, I don’t know, a few months.” The actor than revealed that how found awkward to ask her because of the age gap and said, “And then I came to London. Well, I liked her, but I didn’t want to jump the shark on it, I couldn’t tell if she liked me because I’m 17 years older than her. So she might have thought I was grandpa, I don’t know.” Also Read – Robert Pattinson to play Batman – Here’s what fans have to say about the new caped crusader

The actor revealed he decided to move to Amal and asserted, “And then I got to London to score a movie. We were scoring at Abbey Road, and I thought, ‘Well if you’re ever going to impress anybody, it’s with a 150 piece orchestra at Abbey Road … And she’d just come from a meeting at work where she was trying to tamp down a problem with the Muslim brotherhood, she comes to Abbey Road.” The Gravity actor added, “I don’t know … compared to all the other things that she was dealing with that day. I think Abbey Road might have just been a relief.”

World war 3: Xi vows he will never renounce use of force over Taiwan –…