BTS’ V becomes the FIRST and the only Korean artist to feature on Burj Khailfa; ARMY celebrates with #TaehyungOnBurjKhalifa 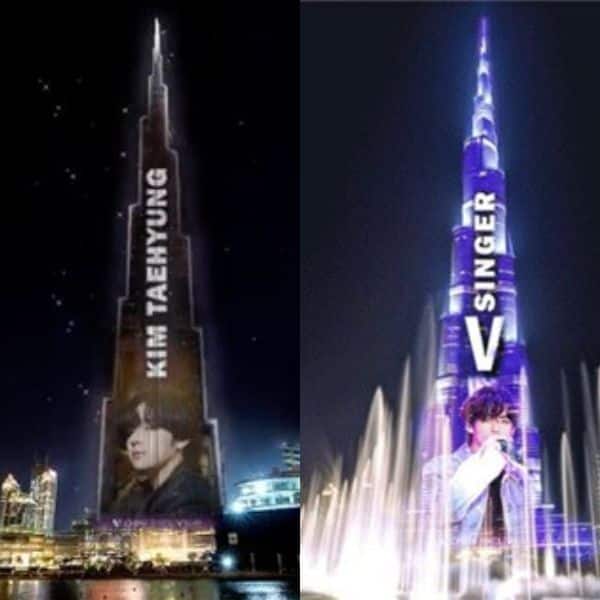 It is indeed one of the proudest moments for the BTS fans. The second youngest in the group, Kim Taehyung, popularly known as V, received a special treat from his Chinese fans. And it’s unbelievable. The Chinese BTS Army fans collected a sum of a whopping $1 M as a part of his birthday projects. V enjoys the maximum attention in the septet and fans do all kinds of crazy and lavish stuff for the BTS singer once his birthday month begins. Yes, Taehyung aka V will turn 25 on 30 December and he has received a special treat from his fans already. V’s Chinese fanbase @KIMTAEHYUNGBAR_ took his birthday celebration on a new whole level by featuring their idol on none other than Burj Khalifa. Yes, you read that right. Fans on social media are going crazy and are trending #Taehyungon BurjKhalifa to mark the occasion and celebrate V’s birthday. Also Read – Christmas Love song: BTS’ Jimin sends early cheer for the ARMY with a melodious number

One of the fans had tweeted out saying that Taehyung had been excited like a baby after watching the Burj Khalifa light show live when he and the BTS band had visited Dubai once. The fans said that he deserved all the happiness in the world. There are some fans who have begun a trend of Kim Taehyung World Domination on social media. Check out the tweets here: Also Read – BTS’ Jimin demands and advises having eggs daily on a megaphone leaving J-Hope and Junglook ROFL

Kim Taehyung is the first Korean Celebrity to have Individual AD on Burj Khalifa and since it’s at end of the year makes it more exciting and we remember how excited Tae was when he saw Burj Khalifa and fountain. He deserves everything. #TaehyungOnBurjKhalifa

#KIMTAEHYUNG is the First Korean idol whose b’day ad is played on world tallest tower.. ??U deserve everything, all these fans, all the happiness in the world#TaehyungOnBurjKhalifa pic.twitter.com/wko127rfBx

This is really huge!
So proud of Tae and Army! <3 #TaehyungOnBurjKhalifa pic.twitter.com/SoWsjUGwwC

For those not in the know, it takes almost 68K USD for a single 3-minute display on the skyscraper. The amount equals about Rs 50 Lakhs. And the Chinese fan base collected about $ 1 M USD in about 80 days for various projects on Kim Taehyung’s birthday. The projects also include a Water Fountain show with winter bear as background music, a school. And that’s just not about it.

if ur wondering how china taehyung bar affords this… they raised over 7 million rmb (1 MILLION USD) for taehyung’s birthday this year in just under 80 days… so pic.twitter.com/n3ULqReATE

Meanwhile, Kim Taehyung droppped a Christmas special song called Snow Flower yesterday. The theme of Snow Flower is a song to spread cheerful for ARMYs all around the world who might not be feeling their best on such a special day. V through the song intends to let everyone know that they are sailing in the same boat and to keep hopes and spirits high as this too shall pass.

Who has the Riverdale actor dated?