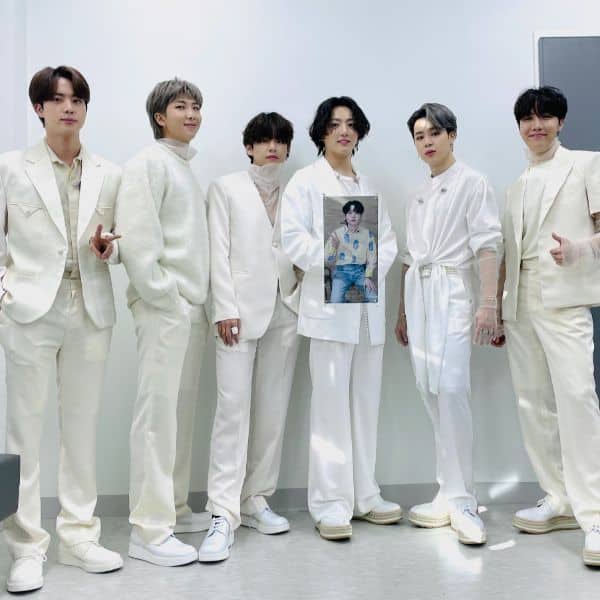 The 2020 Mnet Asian Music Awards took place yesterday, however, this time without an actual audience. The pandemic is still at large and hence following the safety measures, there was no audience but they sure got to watch it live. And yet again, the BTS ARMY are super happy as the K-pop boy band swept not one but seven MAMAs. Yes, you read that right. This includes 4 Daesangs – Album of the Year for Map of the Soul: 7, Song of the Year for Dynamite, Worldwide Icon of the Year, and Artist of the Year, and Best Male Group, Best Performance – Male Group (Dynamite), Best Music Video (Dynamite), and the Worldwide Fans’ Choice Top 10. Suga’s collaboration with IU also bagged an award for Best Collaboration. Also Read – BTS sends out a positive, uplifting message to all their young fans sitting for Korea’s College Scholastic Ability Test — watch video

James Corden provided the Album of the year Award (BTS – Map of the Soul: 7) to BTS and in his thank-you speech, Jimin said, “Thank you! There are people who might not know this, but Suga is recovering from shoulder surgery. But because we’ve received such a big award, he’s made a surprise appearance tonight.” It seems Suga was watching it online and took this opportunity to thank the fans. He said, “I am watching the ceremony live. I want to say thank you to the ARMY, who have given us the Album of the Year award. It’s the second year in a row that we’ve received the Album of the Year award. This is for the album that received the most love this year, right? We worked hard to prepare this album in the United States and more, so we’re grateful that it received so much love. I feel happy knowing we’ve won Album of the Year. I’m working hard on my recovery, so please don’t worry. A lot of people I know are texting me saying that they’re having fun watching MAMA, but it feels weird because I’m not there. It’s a bit embarrassing to say this, but I’m with you all in spirit. Thank you. ARMY, I love you.” Also Read – South Korea passes bill permitting BTS to postpone mandatory military service to age 30

Dashing actor, Park Seo Joon presented the septet (except Suga) with the Worldwide Icon of the year award. RM took the opportunity to thank the ARMY, saying, “I’m nervous. You can see I’m nervous while I’m wearing a mask. ARMY, do you hear me? First, I’d like to give a shout-out to our worldwide handsome Jin, and also, I’d like to shout-out our worldwide ARMYs. All over the world, in your room, in your house. I hope that my truth and my mind can be conveyed through this paper thing [his mask]. As we think of ‘worldwide,’ I wonder if the world is really wide. Of course, it’s wide, but in the territory of music and love, the world is not that wide. It’s really small, actually. Throughout this year, thanks to your love and support, we could feel you as if you were right beside us and right in our minds. We are all connected. Our worldwide ARMYs made this award and gave it to us. I hope that you can stay safe and we can meet in person and say ‘I love you’ to each other.” Also Read – BTS makes history as Life Goes On becomes the 1st Korean song to top the Billboard Hot 100 chart

Picking the Song of the year Award for Dynamite, RM said, “MAMA is the one awards ceremony that we weren’t invited to when we made our debut. We really wanted to come here, and it was a ceremony that we felt a lot of envy for, but as time went on, we received such big awards here in succession. It is deeply moving for us. Dynamite is a piece of luck that came our way when we were weighed down by these tragic times. We didn’t know that it would receive this much love. During these difficult times, there were times when it weighed on our minds that we were the only ones receiving such good news, and we didn’t feel comfortable with it. Whether it’s like Dynamite or like Life Goes On, through dance and music, could we say that we should plant our feet in the ground where we stand? Because there are so many people who cannot do the work that they used to do anymore, we wondered if we could really say something like that. In the end, we are people who dance and sing, so we feel both grateful and sorry that people accepted into their hearts our message that we should have faith in a better tomorrow. It’s sad and difficult and joyous to say this, but time will go on, tomorrow will come, and the morning will rise. Let us work hard at living and greet the new morning with a smile. Whether it’s explosive like Dynamite or calm like Life Goes On, we will plant both our feet in the ground and work hard as BTS. Thank you for all the love you’ve shown us.”

BTS’s J-Hope on being named the Artist of the year, said, “I’m grateful to ARMY for staying up with us so late. The weight of this award makes us realize that it is truly the end of the year. It is an honor to be able to perform every year at the end-of-year ceremonies and receive such great awards. A lot has changed in the world, but this feeling hasn’t changed. Every year, as we take another step on our path to growth, the words we say the most are: to our amazing fans. Being able to receive these awards, being able to perform here, this is all thanks to the ARMY. It’s a bit awkward to say this, but the heroes of this award are the members. We were able to get through this year because of these members, and this team. I don’t know if Suga is watching this, but please get well soon and stand on stage with us soon. We shine more when you’re with us.”

In the end, Jimin thanked their staff, everyone at the BigHit Entertainment, their families and friends, saying, “Somehow a whole year has passed. We worked so hard, but it felt like it went by so fast, and sometimes so slow, that it’s hard to remember it all. I’m not sure how to think about it. It’s complicated and sad and happy and angering and there doesn’t seem to be much that was left behind, but in any case, it went by. But we held on, so I hope that next year we can return here and meet again.”

The boys also took to their Twitter handle of BTS and thanked the ARMY for their immense support. Guess that meme is so true, whilst everyone is having a bad year, the BTS Army is having a blast.

“D***s Make Wonderful Sculptures & Other Than That, I’m Not As…

Koriehopeworldnews Jan 20, 2021 0
The Conservative Party of Canada’s caucus will be holding a vote on Wednesday to decide whether to remove MP…

Several National Guardsmen pulled from duty at inauguration over…

National Guardsmen pulled from duty at inauguration over possible…