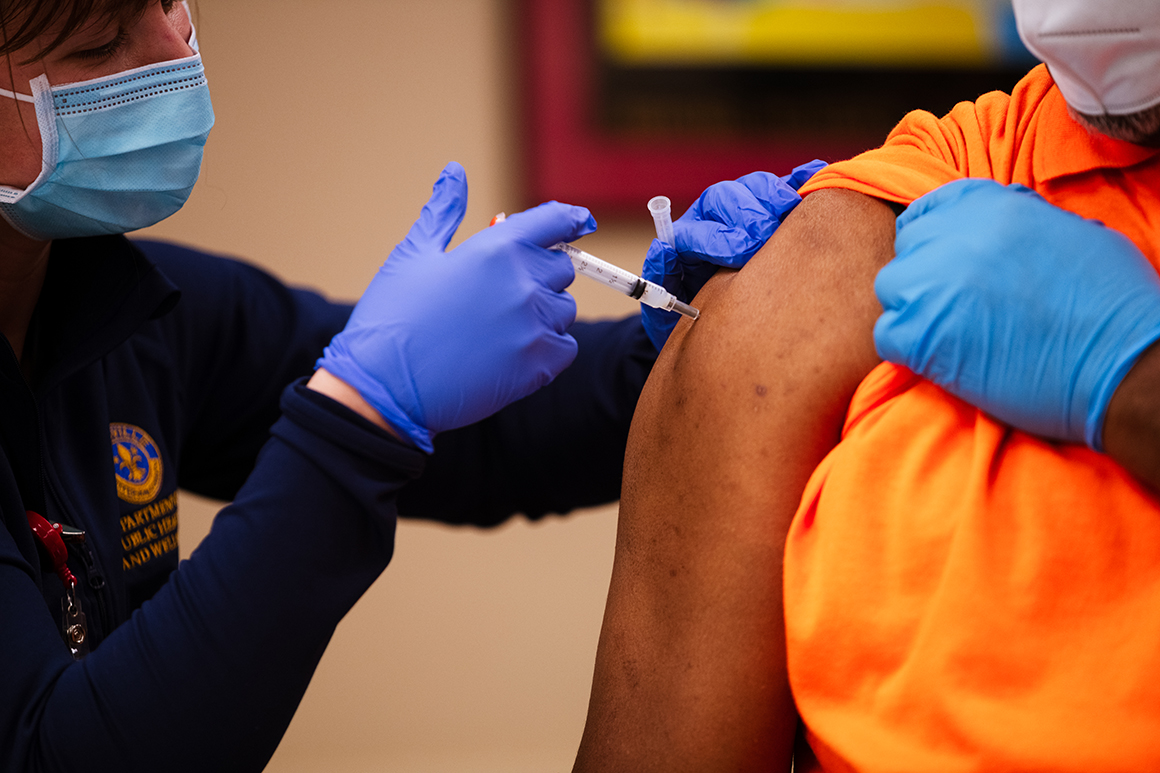 Several state officials on Thursday pointed to supply shortfalls as the chief obstacle to their distribution efforts, adding that directives from both the outgoing and incoming administrations that states should widen their eligibility guidelines wound up depleting reserves.

“What you’re seeing now is the very limited supply that everybody knew was going to be the case, but was not understood by the public,” said Chrissie Juliano, executive director of the Big Cities Coalition, which represents metropolitan health departments. “Suggesting that we allow everybody over 65 to get a vaccine in the hope that it would move supply, while it came from a good place, is just not a reality on the ground.”

Health officials have also struggled with extensive data problems that have hampered states’ ability to update the government on its day-to-day vaccine supply, a lag that’s made it difficult at times to convince federal officials that they’re running low – or track where new shipments are being delivered.

Those issues could take weeks to fix, state and federal officials said, and represent the kind of complex effort that could quickly bog down the Biden administration’s response.

On Thursday, Biden rolled out a 200-page national strategy to curtail the coronavirus, part of an effort to show a clean break from the Trump administration, which shirked responsibility for vaccine distribution and created a patchwork system across the country.

The president signed 10 executive orders ranging from invoking the Defense Production Act to expedite production of vaccine supplies to directing the Department of Education to give schools guidance on reopening safely.

Health experts applauded the quick steps and the detailed plan, but they also acknowledged there will be delays putting it all into motion. Although the plans have been underway for months, getting huge government agencies to quickly execute — especially without permanent leadership in place — will be difficult.

A key part of the president’s plan to increase vaccinations is federally-supported distribution sites, with the goal of creating 100 sites by the end of February. But state officials warned that if supply did not increase, the plan would only further disrupt efforts already underway to keep up with rising demand.

“Where are they going to get the doses for that?” said Claire Hannan, executive director of the Association of Immunization Managers. “It makes me a little queasy to hear these community vaccination centers and mobile vaccination clinics – all great ideas that are in these plans, but what’s missing is the doses and the resources.”

The federal government further alarmed some state officials on Thursday, when the Centers for Disease Control indicated it would begin counting Pfizer’s vaccine vials as the equivalent of six doses — up from five, according to an email from the agency obtained by POLITICO.

Those vials require specific syringes to extract all six doses, and that type of syringe is in such high demand that the Biden administration said Thursday it may use the Defense Production Act to ramp up its manufacturing.

Biden officials are also likely to run up against strict limits on the nation’s total vaccine supply for the next several months. Pfizer and Moderna have pledged 200 million total doses by the end of March – enough to hit Biden’s initial pledge, but far from what is needed to achieve herd immunity.

And while Biden on Thursday touted his willingness to use the DPA to speed manufacturing, that expanded stash of materials and supplies won’t have any immediate impact on the response.

“It’s not a magic wand,” said one former Trump administration official. “They need to explain what they’re going to do with it.”

Biden’s team is still getting high marks for being honest and transparent about the challenges the country faces in eradicating the pandemic, one that Trump routinely dismissed. Fauci, the nation’s top infectious disease expert who repeatedly sparred with Trump officials, also spoke of feeling “liberated” as the Biden administration hsa elevated him and his colleagues.

“The idea that you can get up here and talk about what you know, what the evidence, what the science is, and know that’s it — let the science speak,” he said Thursday. “It is somewhat of a liberating feeling.”

Yet when pressed to detail exactly how Biden’s lengthy blueprints and much-touted executive actions would translate to more vaccinations on the ground, Fauci was far more tight-lipped.

“To do whatever he can to expand the availability of vaccines,” he said. “Whatever that is, he’s just said he’s going to use whatever possibility.”

“COVID-19 Can Cause the Body to Attack Itself”

Koriehopeworldnews Feb 25, 2021 0
A former member of Syrian President Bashar Assad's secret police was convicted Wednesday by a German court of…

Germany shamed as only 15% of AstraZeneca vaccines used – Shot…